New Hampshire independent journalist Dave Ridley was acquitted yesterday of trespassing charges by Nashua district court judge Thomas Bamberger. Supporters from around the state took video and notes at the trial, which began at 1:00pm and lasted an hour and a half. The prosecution called four witnesses total, two of them being employees of the Radisson in Nashua. The first witness, Ellie Wooldridge, testified that she had given Ridley an order to leave and that he refused. Under cross examination, it became unclear whether she had ordered or asked Ridley to leave, and what she claimed Ridley said under direct examination was brought in question. The second witness was Radisson general manager Tony Lucca, who incorrectly testified that he had identified himself to Ridley. Ridley began leaving the property after his brief encounter with Mr. Lucca, and at this point police were the only ones who had contact with Ridley for the duration of the encounter.

Lieutenant Ray McDannell, a 22 year veteran of the Nashua police department was called next to the stand. On his way toward the witness stand, he said a greeting to the judge, as would the following police witness. The prosecutor’s questions focused on the fact that Ridley was videotaping as he left and the fact that he was walking backwards. Based on the fact that Ridley was already on the other side of the driveway when police responded, defense attorney Seth Hipple asked McDannell if this action implied Ridley was leaving. McDannell responded, “He was busy videotaping us.” After McDannell stated, “Leaving wasn’t his first priority”, the judge pointed out that witnesses could not speak for what another person’s intentions may have been (unless, of course, they verbalized it). This issue would come up multiple times in the case, as officers stated their belief that Ridley was not intent upon leaving.

In addition to unclear, conflicting orders/requests from hotel staff, Lt. McDannell stated as he first approached Ridley, “Sir, you’re going to have to stand over there for right now.” He follows that up with, “And then you’re going to be asked to leave.” When asked if his orders implied that Ridley was to remain on the property and would soon be given an order to leave, McDannell replied that he didn’t intend his words to mean that.

The fourth witness, Lt. Denis Linehan, testified to what motivated his actions on May 25, 2011. Linehan, who was a Sergeant at the time, was the one who initiated Ridley’s arrest. Less than thirty seconds from when Linehan gives Ridley orders to “Keep moving”, he arrests him after making several demands for his name. While being directly examined, Linehan stated his two reasons for demanding Ridley’s name. The first reason was to follow the department procedure for dealing with a suspect, acquiring their name and date of birth. The second was to make an inquiry into whether or not a car was registered in Ridley’s name. The first reason would seemingly only apply to detained suspects, otherwise Ridley is under no obligation to speak to the officers about anything. If they had probable cause to suspect Ridley of a crime, they could then hold him until he was identified, but in this instance, if there’s enough evidence to detain him for trespassing, there’s already enough to initiate the arrest. The second reason may have been on Linehan’s mind at the time, but he nonetheless arrested Ridley in less time than a motor vehicle query likely would have taken. The cross examination of the state’s final witness ended with Linehan admitting that Ridley was arrested close to where his car would later be located.

Dave Ridley waived his fifth amendment rights and took the stand in his own defense. The defense began by establishing his career as a journalist, which he has been engaged with since 1988, having worked for a number of news stations in Texas. Ridley described how his backwards walking that day, which the police seemed to take as a symbol of defiance, is exactly how he’s trained to leave an active scene as a videographer. It would make for very unprofessional videography to attempt documenting a scene over one’s shoulder. The prosecutor seemed to think this was a significant enough point that he asked the police witnesses, “Did he, at any point, turn around?” In any case, it would be somewhat unnerving to turn one’s back on three people who are actively moving towards you.

An aerial photograph of the Radisson property was presented to Dave, and he drew with a pen the path he took towards his car that afternoon. It demonstrated a relative path of least resistance from the point he was ordered to leave to the location of his car. It also made visual the amount of progress toward his car that he had made before he was arrested for supposedly refusing to leave. 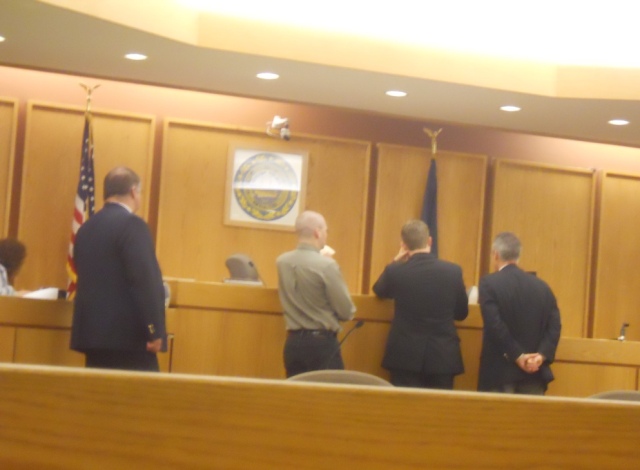 The defense and prosecution gather around a laptop to watch Ridley's video evidence.

At 2:00pm, after Ridley’s testimony, the question was raised as to whether the videotape would be viewed as evidence. The prosecutor said of the tape, “We both decided we don’t mind showing it”, speaking of himself and the defense. The judge asked of its relevancy, given the amount of evidence heard up to that point. The defense asserted the significance of the tape given contradictions between the recording and what was claimed in court. At ten minutes, the tape played in court was a longer video than had appeared on the Ridley Report, which included his interaction with the hotel sales manager who had testified against him.

The defense was first to make closing statements. After the defense concluded, the state did not get more than ten seconds into his closing argument before the judge cut him off and began asking questions relevant to whether or not the state had proven its case. The prosecutor, who seemed to stake much of his case on the fact that Ridley left backwards and never stopped videotaping, said flatly during his final points, “If he would have turned around and walked away, we wouldn’t be here today.”

The judge began his verdict with, “I respectfully disagree with the state in this instance.” The judge highlighted that Ridley was under no obligation to answer questions (which officers on the scene admitted initially), that Ridley maintained constant motion throughout the video, and that whether he was videotaping or facing the officers, Ridley was making an effort to leave the property in a reasonable time frame. Ridley was found not-guilty of trespassing at the Radisson on May 25, making the original video from the scene a great training video for officers on how not to handle a trespassing allegation.

Outside the courtroom after the verdict, attorney Seth Hipple spoke with Ridley and supporters about the case.

Today, Ridley released a 16 minute raw video that includes his interaction with Ellie Wooldridge. It is in higher definition than the version that launched shortly after his arrest.